Normally, people give you presents to celebrate your birthday, but the Buck twins, Dan and Dave, are doing things the other way around by releasing two new decks: Antler and Vintage Plaid No. 2. 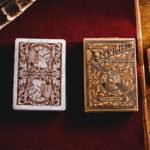 The stunning ace of spades from the Buck twins’ Antler deck 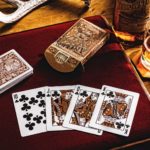 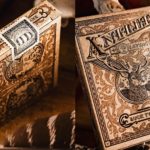 The tuck on the Antler deck from Dan & Dave

Sounding like it came right out of an LL Bean catalog, the Antler deck is “born from the wild forests, rolling hills, and snow-capped mountains of Northern California.” The back color is “tobacco brown” and the design features two twin bucks (get it?). The Ace of Spades features its own solitary buck with glorious antlers, while each Joker offers the Antler name. The tuck case is “letterpress printed on premium craft paper with foil accents and sculptural embossing.” Fair warning: if we see you with this deck, we’re going to assume you can survive in the wilderness – or at least start a fire without matches. 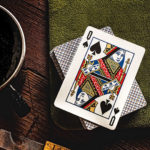 The face cards of the California Blue Vintage Plaid No. 2 are simple, but classic. 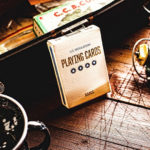 The backs of the California Blue Vintage Plaid are understated and timeless. 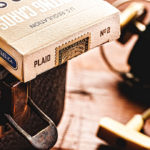 The tuck for the California Blue Vintage Plaid. 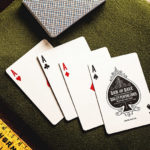 The custom Ace of Spades for the California Blue Vintage Plaid deck.

The second celebratory deck is the California Blue Edition of the Vintage Plaid No. 2 deck. It’s understated and classic, the kind of deck that never goes out of style. It’s naturally quite similar to the Arizona Red version that came out last year, but the cool blue backs of the new deck are perhaps just a touch more timeless.

You can purchase either deck from Art of Play (Vintage Plaid is $10, Antler is $12) or Dan and Dave.

Suave French Magician Does Cardistry in 1964

Chuck the tuck with Keeper Reloads