Menu
Menu
Mandrake the Magician is a comic book legend, but a failed television show kept him from becoming a star

He’s one of the earliest superheroes, who uses science, gadgets and deductive reasoning to bring villains to justice – but he’s not Batman. He’s a student of mystic arts and has mastered the arcane, but he’s not Doctor Strange, or even Sargon the Sorcerer, though both borrow from him. He and his creator’s other breakout hit, the Phantom, help define what it is to be a 20th Century superhero. He’s Mandrake the Magician, who even today guards humanity, and the Galaxy, against threats both natural and supernatural, from his mountain fastness Xanadu in New York State – and thanks to a failed television pilot and constant mismanagement, there’s a good chance you’ve probably never heard of him.

Lee Falk created Mandrake in 1934 while a student at the University of Illinois. Mandrake was Falk’s tribute to the gentleman thieves and well-travelled heroes of the pulps, like Maurice Leblanc’s Arsene Lupin, and Edgar Rice Burrows’ Tarzan. He borrowed his snappy wardrobe from Lupin, though his physical appearance – mustache and all – was pure Falk. As Falk told it, of course Mandrake looked like him; Falk was looking in a mirror when he drew the Magician.

At first it was just a way to have fun, and Falk noodled onward without any real plan to sell his work. Then, almost on a whim, he sent his first two weeks’ worth off to King Features, William Randolph Hearst’s publishing arm. King loved it. King wanted more – eighteen panels a week, plus a Sunday page.

Suddenly, at the age of twenty-two, Falk found himself in business, in a very big way.

The strip took shape. Mandrake, originally a stage magician, developed hypnotic powers and acquired a magic hat, cloak and wand. His friend Lothar, Prince of Seven Nations, was the strongest man in the world. Princess Narda, from the land of Cockaigne – a mythic land of peace and plenty – was Falk’s ideal woman, and Mandrake’s companion. Together they were Three Against Evil.

However though the strip was Falk’s, the rights belonged to King, and that included the right to spin off into other media. “King Features acted as my agent through all that,” Falk said in a 1996 interview, “And they paid a little royalties, very little.”

So when King decided to make a radio show (like the one found above), or a movie serial, Falk had little say in what happened next. Neither worked out, though the radio show was more favorably received than the serial, with Falk describing the production of the serial as “badly and unimaginatively done.” The radio show lasted two years, but after the movie serial’s 1939 release there were no more plans to bring Mandrake to the big screen.

War came and went. Lee Falk worked for the Office of War Information, and later joined the Army. By the time he demobilized there was a new medium to be conquered: television. There was a voracious demand for content, and NBC was quick to notice that pulp heroes were extremely popular – and profitable. Why not Mandrake?

NBC partnered with Bermuda’s Trade Development Board to build a television studio at an abandoned seaplane aerodrome, and the Board agreed to pay half the $1.5 million set-up cost. It would have dressing rooms, a restaurant, two sound stages, a theatre for screenings, offices, prop rooms, and everything else a full-scale production unit needed. NBC could rebuild the entire aerodrome as a set if it liked, and it had a 99-year lease on the property. The weather’s perfect for shooting – even sunnier than California, NBC claimed – and if this worked, NBC would have a money-spinning TV show, of which Falk would see modest royalties.

In May 1954, NBC made the first move and incorporated Atlantic Productions (Bermuda) Ltd. to control the enterprise. It hired locals both as unskilled labor and as on-screen talent, reserving five Mandrake speaking roles for Bermudians. Seventy five hopefuls, including a baby and a professional stage magician who promised to be available “any day, any hour,” audition.

On screen, the Three Against Evil were inexperienced but hopeful. Coe Norton, Mandrake and magical technical consultant, had a short list of 1950s TV credits. Lisa Howard, only twenty-four, had a string of film and television credits, including a role in perennial soap The Guiding Light. Woody Strode, as leopard-skin clad Lothar, was probably the best known of the three leads. By 1954 he’d already had a trailblazing career as one of the first black players in the NFL, played a number of roles in jungle pictures throughout the 1940s and 50s, and was an established professional wrestler.

However things didn’t go according to anyone’s plan. Art Director Dick Sylbert complained that he couldn’t get anything done at the pace he’d like; he was used to picking up the phone and getting what he wanted almost before he’d put the phone down. That very definitely was not the Bermuda way. Meanwhile the producers were tearing their hair out over the tour boats that came to Darrell’s Island at Bermuda every week. People were keen to see what all the fuss is about, and as the aerodrome was easily accessible by water they just motored up and asked if there was any shooting going on that day. Yes, the producers responded through gritted teeth; now will you please go away and let us get on with it? The sound of your boat’s engine is ruining our shot! 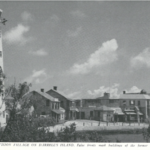 Shot of the aerodrome 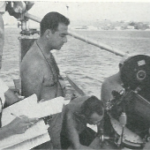 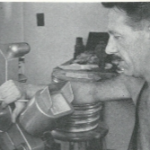 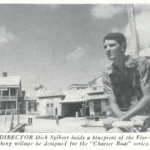 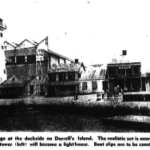 Fishing village, with the old aerodrome control tower disguised as a lighthouse. 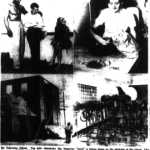 A menage of 4 shots, one of which shows Woody Strode and Coe Norton in conference with the wardrobe mistress Corinne Doe. The others are: food prep at the restaurant, building the set, and a collection of lights. 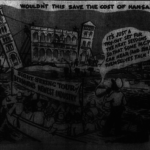 A sightseeing tour comes to Darrell’s Island. The building is our House of Assembly; the joke is that the MPs – or MCPs as they would have been then – come to rehearse their long-winded speeches on set. It’s probably the least interesting of the images, but it has local appeal – and it acknowledges the tour boat problem.

Mandrake’s problems were bigger than boat engines. Coe Norton later told M-U-M Magazine, mouthpiece for the Society of American Magicians, that the producers had no idea what to do with the show. Five different directors tried their luck. Among the more unusual demands was a stage magic performance for a colony of blind people, and a complete program of magic was to be performed in a hotel swimming pool at six hours’ notice.

Only nine episodes of the planned twenty-six were filmed, and only one – the pilot – ever got made. Coe Norton blamed rights issues, and told M-U-M that the series was tied up in litigation.

This was a pattern that continued throughout Mandrake’s long career. On paper he was the kind of pulp hero that ought to make waves, but the people most interested in his career were also the least involved in projects like the TV show. Lee Falk didn’t own the rights. King did – and King didn’t know what to do with them.

When Falk wrote the book for a Mandrake musical, it got a performance up in Massachusetts, but when a money man tried to bring the show to Broadway he discovered that King had sold the movie rights, and without a movie option he couldn’t interest investors in the Broadway show. When auteur director Federico Fellini wanted to make a Mandrake film, he too discovered that King had optioned Mandrake to someone else.

Of course, as far as King was concerned, Mandrake was just one of many. At its height, King exec Sylvan Beck said the syndicate received 1,000 comic strip submissions every year, and would only choose one. If a project like the Mandrake TV show didn’t pan out, King had plenty of other properties to choose from.

It didn’t help that Mandrake is pure fantasy. Falk’s other comic creation, the Phantom, aka the Ghost Who Walks, is just as pulp, but ultimately grounded in reality. The Phantom may have a Skull Cave, but he uses fists and gun, and the enemies he faces are relatively mundane. Whereas Mandrake, with his Eastern mysticism, magic apparatus and hypnotic powers, is much more exotic, and often deals with the supernatural. That’s before you consider that his girlfriend literally comes from a fantasy kingdom, and his best friend is stronger than a thousand men.

It’s a problem that can be seen in the TV show (which you can watch via YouTube below). Mandrake’s powers almost beg for special effects wizardry. Instead what we got was a poor madman babbling about flowers. As Falk pointed out when discussing the movie serial, even at that time the directors could have tried something a little more visual – anything, really, so long as it sold the idea of a magic man doing incredible things. Instead we got a crime fighter just like all the others, except this one was in formal wear and had a knack with throwing knives.

After the 1954 TV show wrapped, Bermudians were shown Mandrake in viewings at the local cinema. A child buried her face in her father’s chest and wailed, “that bad man is beating up my daddy!” William ‘Cheese’ Ray, the unnamed villain thrashed by Lothar, could only smile. It was the start and end of his television career.

The team broke up. NBC kept its studio for a brief while, and a movie was shot there in 1956, but NBC no longer had any big plans for its Bermuda outlet, and the expensively renovated seaplane aerodrome was allowed to rot.

Coe Norton had a good life, but never really became famous. If ever you see a 1960’s era TV commercial for cigarettes or Charmin starring a debonair master of magic, you’re probably looking at his work. Woody Strode went on to become one of the most recognizable and talented character actors of the 20th Century, appearing in many westerns, especially for director John Ford, who championed Strode.

Lisa Howard gave up acting and reinvented herself as a journalist, becoming ABC’s first female correspondent. She backed liberal Republican Kenneth Keating in his 1964 Senatorial reelection contest against Robert Kennedy, and because of this ABC fired her. In 1965, at the age of thirty-five, she overdosed on barbiturates and died on the 4th of July.

Mandrake continued his career, with Falk writing his adventures until his death in 1999. Even today his continuing adventures appear in magician-centric magazine Inside Magic, with King’s permission, and there are any number of reprints of his past escapades.

Even so, it’s hard not to imagine what could have been; had the NBC show not flopped miserably, maybe we’d be talking about the Mandrake Cinematic Universe alongside Marvel and DC Comics. With Sacha Baron Cohen set to play Mandrake on the silver screen in 2019, here’s hoping he’ll finally have his shot at the spotlight.