Comedian and magician Judy Carter has a new show now in Los Angeles. Take a look! Link to purchase tickets below.

Press Release:
David Kordansky Gallery is pleased to present Magic, Mystery & Legerdemain, the gallery’s first solo exhibition event by Derek Fordjour. Taking its title from the magician Black Herman’s 1938 autobiographical book Black Herman’s Secrets of Magic, Mystery and Legerdemain, the show provides a multifaceted forum in which Fordjour explores magic as it relates to power, race, and a myriad of illusions throughout American history. Magic, Mystery & Legerdemain will be on view March 26 through May 7, 2022, with magic performances by Kenrick “Ice” McDonald occurring daily at 2 p.m. Tuesdays through Saturdays during the run of the show. McDonald’s presentation is called The Legend of Black Herman, written and directed by Numa Perrier, in which he portrays Black Herman in a 20 minute performance. An opening reception will take place on Saturday, March 26 from 6 to 8 p.m., with the magic performance occurring at 7 p.m.
https://www.davidkordanskygallery.com/exhibitions/derek-fordjour2

Penn & Teller write: “Excited to announce @carbonaro taking over our theater @riovegas May 26-July 10 while we tour Australia. He’s a good friend and a great magician. Tickets for his run of shows go on sale today at https://www.ticketmaster.com/michael-carbonaro-tickets/artist/2183135.”

Added to an ever-expanding list of weird combinations casually encountered, a Celtic dance troupe has teamed up with a stage illusionist for the show Celtic Illusion. Dance a jig, float a lady! And it’s coming to a city near you!

Illusionist Rick Thomas is opening at the Andy Williams Theater in Branson, Missouri with a full-evening show. https://andywilliams.com/?page_id=21 He’s a stylish magician, and here’s a taste! Hint: you can go even if your hair isn’t blue.

Greenmount Station restaurant, in Hampstead, Maryland, is now home to a magic theater attracting the best talent in the world. In 2018, magician Dave Thomen established the restaurant theater-concept to showcase other regional talent, and now the theater will headline with international celebrities of magic.
These Tuesday evening shows are scheduled bi-monthly. Guests arrive early for dinner and then enter the restaurant’s 30-seat theater. The January 2022 post-pandemic reopening featured a magician from The Magic Castle in Hollywood. Now the restaurant is taking reservations for March 29th and May 10th featuring two magicians who have been on the television series, Penn & Teller: Fool Us. May 10th is the day world-famous magician Eric Jones, who regularly performs on the Disney Cruise Line’s “Fantasy” will be appearing at Greenmount Station. 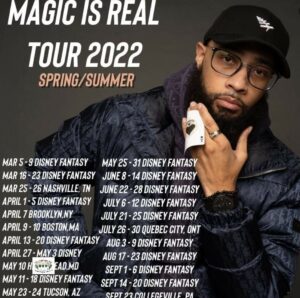 Here’s who’s performing at The Magic Castle in Hollywood, California, a private club for magicians. How do you get in? We’ll be publishing an article about that shortly.

You can catch the fabulous magician Mondre in residence at Late Night MAGIC, the after-dark magic show for adults at Alexis Park Resort Hotel in Las Vegas. MonDre has a unique style, evident in his performance and the jazz that accompanies it. He’s one of the best professional magicians working today.

Publicity: “Late Night MAGIC features a rotating cast of four unique magicians who are edgy, dark, mysterious, and sexy acts intended for mature audiences only. These magicians have been seen on stage at major Las Vegas strip hotels and The Magic Castle in Hollywood, CA, as well as on national and international TV shows like America’s Got Talent, Ripley’s Believe It Or Not, The Late Late Show with James Corden, and Ghost Adventures. The brainchild of Michael Mayfield and Douglas Leferovich, Late Night MAGIC, is the answer to MAGIC shows too frequently focusing on being “family-friendly” when so much of MAGIC’s history and mystery is dark, edgy, and often sexy.”