Potter & Potter’s magic auctions have covered some wide ground, including one-sheets from the golden age of magic and props and accessories once used by the late great Harry Blackstone, Sr. Their upcoming Spring Magic Auction promises to offer the same variety and quality of prestidigitation peculiarities, only this time, it’s all about Houdini.

The great conjuror and escape artist is the focal point for the upcoming auction, which takes place on April 28 at 10am Central. The highlight of this collection is easily a two-volume collection of spiritualism scrapbooks, written and compiled by Houdini and later bound into leather books by Joseph Dunninger. These volumes offer a glimpse into Houdini’s obsession with debunking spiritualists, with the second book almost entirely devoted to notes and newspaper clippings about author Sir Arthur Conan Doyle’s own belief in the supernatural. If you’re interested in snagging this stunning set for your own library, get ready to pay a pretty penny: the listing starts at $30,000, and is expected to sell for at least $40,000, if not more.

Another highlight includes a trove of unpublished Houdini history, including a manuscript for a Houdini biography written by his assistant and secretary, Elliot Sanford. Sanford followed Houdini around for years, and kept over 100 pages of records and notes on the magician’s exploits, including details about Houdini’s home and never-before-revealed info on the final year of his life. This one will run you at least $10,000.

There are, of course, loads of other, non-Houdini-related items up for auction, including an assortment of issues of The Sphinx (including the first volume!) starting at $250, a variety of vintage comedy “Bang” guns each starting at $150, as well as an assortment of old-timey posters for Carter the Great and Chung Ling Soo.

Like previous Potter & Potter auctions, you can check out a full PDF catalog of the available items here, or you can visit the Potter and Potter gallery in Chicago on April 26 and 27 to view items from the collection in person. For more info on the auction schedule and how to bid online or via phone, check out their website here.

Whether you’re a long-time collector of magic antiques and ephemera, or you’re just starting to build your own collection, the Winter Magic Auction hosted by Potter & Potter looks like it’ll have something for everyone. A variety of items from several collections will be made available to bid on beginning December 16, and includes vintage tricks and apparatus, original and rare posters from the Golden Age of Magic, first-edition books, and much, much more.

Here’s a description from the auction page:

Our December sale will feature magic collectibles in a wide range of categories. From uncommon Chung Ling Soo posters to early broadsides, a selection of rare and unusual Taytelbaum-made tricks, choice ephemera, collectible apparatus, and antiquarian books, the auction will feature “something for everyone,” beginning and advanced collectors alike.

A selection of escape artist-related items, including handcuffs, locks, keys, and memorabilia, will be a auctioned, along with a selection of marionettes, Punch & Judy puppets, and ventriloquist’s figures.

Highlights from the auction include original and restored Chung Ling Soo and Alexander one-sheets, each one over 100 years old; a variety of miniature props used by Eddy Taytelbaum; and several books written and signed by Harry Houdini.

As with any of these auctions, you can download the full illustrated catalog of items (or order a physical copy for yourself), and if you want to snag one of these goodies for your own collection, you can find out how to bid on any of these pieces on Potter & Potter Auctions’ official website.

Attention, collectors! Steve Sprague has put the word out that he has an original prop used by Doug Henning that is up for sale. It’s from the World of Magic 4 television special in 1978. The prop is a red curtain painted with a gold dragon, and two wooden dragons that hold it. It was constructed by Johnny Gaughan specifically for the trick, which saw Doug Henning trading places with celebrity guest Brooke Shields.

You can see Sprague’s full description on the Doug Henning Project’s website, as well as instructions on how to purchase it for yourself if you’re so inclined. Or you can just see the trick in action in the video above.

Many magicians are known for their vanishing acts, but in this news development, it’s the magician’s furniture that went missing. Harry Houdini’s New York home is up for sale, and after the first open house, the performer’s parlor bookcase seemingly disappeared. After a little digging by John Cox of the Wild About Harry blog, it turned out the furniture was moved to another property. Now, it may at last have a new owner.

Over the holiday weekend, Cox shared that the one and only David Copperfield is trying to acquire the bookcase. Copperfield already has a large portion of Houdini’s books in his International Museum and Library of the Conjuring Arts, located in Las Vegas. The magician has told Luis de Matos that “We’re trying to get the cabinet from his house that was just discovered, so the cabinet…the bookcase can be reunited with his books. Wish me luck with that. We’ll see what happens.”

There would certainly be a nice poetic justice to the bookshelf and its former contents being reunited, especially if they’re open to the public view. Fingers crossed!

Pawn Stars is the show that makes you wish your grandparents had an enormous attic, as it frequently features folks who find some intriguing tidbit lurking forgotten in the dust, only to discover it’s worth a small fortune. Such is the case when Murray SawChuck introduces Eric, his showroom manager, to the guys. Eric found an antique automaton that performs several different magic tricks in his grandma’s attic, and not only is it all original, it’s in spectacular working order. It’s a seriously cool piece.

Give the video a watch to learn some interesting facts about how automatons were crafted, why shiny silk degrades over time, and how much of a payday Eric can expect.

Watch the full episode of Pawn Stars over at the History Channel. 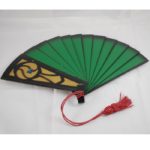 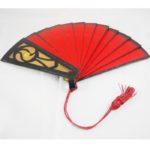 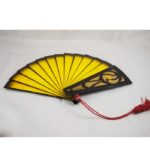 This stunning vintage fan from Abbott’s Magic is all wood and comes with the original instructions. Condition is listed as very good.