Yet another in a seemingly endless series of proposed biopics about Harry Houdini is percolating in Hollywood. It will be a feat of magic if this one, unlike the others, actually gets made.

“The plot of the film is still under wraps, but the story will be set at the height of Houdini’s fame in the early twentieth century, with a certain “Sherlock Holmes” tone to the story, according to Deadline. The film looks to focus on the almost “superhuman” personality that Houdini carried with him throughout all his iconic performances. Houdini was best known as a master escape artist, and escaped everything from simple handcuffs to his infamous act of escaping a straight jacket while being hung upside down in a case of water. He even barely escaped being buried alive and almost suffered a breakdown because of the near-death experience.” 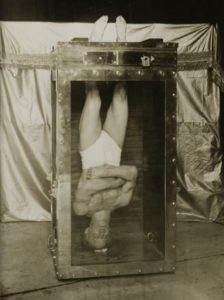