It all started with an email from David Britland. David and I had been corresponding about unusual optical illusions, and he asked if I had come across Robert Harbin’s “The Transparent Man.” I said that I hadn’t and minutes later an intriguing set of plans arrived in my inbox.

Robert Harbin was born in South Africa in 1908. When he was in his early 20’s he traveled to London and started to work as a magic demonstrator and performer (“Ned Williams, the Boy Magician from South Africa”). Nowadays, Harbin is well known for a series of impressive creations, including “The Zig-Zag Lady” and his deceptive version of “Sawing a Woman in Half.” However, most magicians aren’t aware of a curious little book that Harbin published when he was just 21 years old. Entitled Something New in Magic, this slim volume describes a series of unusual and creative items, including a silk that suddenly changes into a table and a pile of children’s bricks that assemble themselves into a castle. Oh, and a simple but extraordinary idea entitled “The Transparent Man.”

Harbin’s illusion involves five large (approximately two-foot-by-six-foot) sheets of clear glass and a backdrop of bright white light. Three of the glass sheets are formed into an upright triangular tube and the remaining two sheets are placed parallel to two sides of the tube. A person stands inside the tube and, when the lights are turned on, the person appears to vanish. The performer can even walk behind the tube and the audience can see him through the glass sheets, further strengthening the illusion.

The method is as elegant as it is amazing. According to Harbin, the glass sheets create a series of reflections that cause the image of the backlight to be broken up, moved around the tube, and re-constructed in front of it. Moreover, the clever arrangement means that the image of anything, or anyone, behind the tube is also moved around it, thus allowing the performer to walk behind the setup and apparently be visible through the transparent person in the tube. The audience believes that they are seeing through the tube, whereas in reality they are seeing whatever is behind the tube projected in front of it.

Harbin’s idea reminded me of an article about the physics of invisibility that I had read a few weeks before. According to the article, physicists are attempting to make objects invisible by surrounding them with materials that direct light around the object. It seemed to me that this is, in principle, identical to the idea behind “The Transparent Man.”

There is, however, one small problem. Building “The Transparent Man” is tricky because it involves several large sheets of glass and creating an entire wall of light. In Something New in Magic, a young Harbin admits that he never actually built a full-size version of the illusion, but instead constructed a model that proved that the principle worked extremely well. As a result, it wasn’t known whether the illusion would work on a larger scale.

Indeed, there is good reason to be skeptical. In the only other article about “The Transparent Man” (Genii, January 2008), Jim Steinmeyer pointed out that the illusion involves the glass sheets being simultaneously both transparent and reflective and so “almost, but never quite, works.” In addition, in The Genius of Robert Harbin, Eric Lewis claims that Harbin’s original plans were wrong and presents a slightly modified version.

Fast forward a few weeks and I receive an email from Google’s Making and Science Team. I run an optical illusion- and magic-based YouTube Channel called Quirkology, and the email said that the Google team wanted to sponsor a science-based video. I instantly thought of “The Transparent Man” and asked whether they were interested in a video that attempted to recreate a large-scale prototype of the illusion and explored the science of invisibility. The proposal received a green light, and David Britland kindly agreed to act as an advisor. The game was afoot. 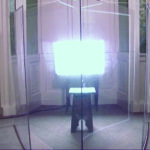 The illusion is set up

The subject is in place 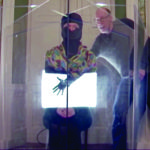 The light causes the subjects middle to appear invisible 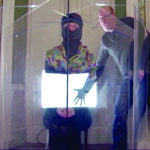 I started off by trying to build a model of the illusion. I bought some nine-inch-by-six-inch sheets of glass (the size originally used by Harbin for his model), arranged them on a tabletop, and placed a doll inside the tube. I placed a table lamp behind the entire set-up, turned it on and was amazed to see … a doll fully illuminated inside a glass tube. It wasn’t looking good. Ever the optimist, I thought that we might have more luck on a larger scale, and so decided to put together a half-size prototype. I bought several four foot by four foot sheets of glass, carefully placed them into the correct positions, and placed a pile of books into the tube. I placed a strong photographic light box behind the tube, turned it on and saw … a pile of books fully illuminated inside a glass tube! It still wasn’t looking good.

The next few days were spent systematically changing each part of the setup. I altered the brightness of the backlight. I removed the sheet of glass forming the back of the tube (as Jim Steinmeyer had pointed out in correspondence, it serves no real purpose). I changed the angle and positioning, of the side sheets. I altered the position of the object inside the tube. I shone the backlight directly through the sides of the tube. Along the way I sent some test stills and video to Jim Steinmeyer, who kindly provided helpful advice and comments. And eventually … success! After much experimentation I was able to have someone sit in the tube and apparently see the light shining right through them. Not only that, but I could hold my hand in front of the light and apparently see the silhouette of the hand through the person too.

In many ways, people had been right to be skeptical about the illusion—the plans in Harbin’s original book aren’t quite right. And the revised plans presented in The Genius of Robert Harbin are slightly wrong, too. However, the general idea is conceptually sound, and with a few tweaks here and there the illusion works really well.

Encouraged by our success I sent the plans of “The Transparent Man” to one of the world’s leading experts in the science of invisibility—Professor Ulf Leonhardt from the Weizmann Institute of Science. He confirmed that Harbin’s illusion is indeed based on the same principle as much modern-day research into invisibility, adding that in many ways Harbin was years ahead of his time. Professor Leonhardt then kindly agreed to come to The Magic Circle in London and appear in our video alongside the Circle President, and huge Harbin fan, Scott Penrose.

And so it’s official—at the amazingly young age of 21, Harbin was something of an optical genius. The basic idea behind “The Transparent Man” is sound and the illusion does work on a large-scale. Are the viewing angles limited? Yes. Did Harbin get all of the details exactly right? I don’t think so. But is “The Transparent Man” an elegant idea that was years ahead of modern day invisibility research? Absolutely.

Our YouTube video received over 200,000 views in just a few days. Take a look and see what you think. We hope that you enjoy it.

This article first appeared in the April 2017 issue of Genii Magazine.